The field macroeconomics is about whole large-scale economies, such as regional, national and global economies. It deals with issues such as how interest rates, taxes and government spending impacts an economy´s productivity, growth and stability. The term comes from the Greek prefix makro– meaning “large” + economics.

Microeconomics (micro is Greek for small) is a branch of economics that focuses on the behaviour of individuals and firms when it comes to the allocation of scarce resources. Compared to macro-economists, micro-economists will be more interested in the study of individual markets, sectors, industries, etcetera than the national economy as a whole.

The fields macroeconomics and microeconomics are connected to each other, and both are a part of the larger social science called economics.

Two areas of research have been incredibly important to the development of macroeconomics: monetary theory and business cycle theory. Monetary theory dates back to the 1500s, and the Basque canonist Martín de Azpilcueta formulated his quantity theory of money in 1556. Businesses cycle theory is a much younger field and did not arise until the mid-1800s. 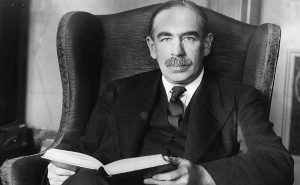 In general, early macro-economists believed that monetary factors would not have an impact on factors such as real output. During the Great Depression of the 1930s, the English mathematician John Maynard Keynes challenged this view, and his theories fundamentally changed mainstream macroeconomics theory and practice.

Members of a generation of macro-economists that followed Keynes synthesized his theory with neoclassical microeconomics to form the neoclassic synthesis (NCS), also known as neo-Keynesianism. Important NCS works were published by John Hicks in 1937, Franco Modigliani in 1944 and Paul Samuelson in 1948. NCS dominated the field of economics during the post-war period, and it hugely impacted mainstream macroeconomic debate until the late 1970s. In the 1970s, NCS theory was shaken by the advent of stagflation.

Monetarism, spearheaded by Milton Friedman and Anna Schwartz, adopted some ideas from Keynes – including the importance of the demand for money – but also opposed Keynes by claiming that he ignored the role of money supply in inflation.

Monetarism emphasizes the role of governments in controlling the amount of money in circulation and asserts that money supply has major influences on national output in the short run and on price levels over longer periods of time. According to the monetarism school of thought, the best way to reach the objectives of monetary policy is to target the growth rate of the money supply instead of carrying out discretionary monetary policy.

Milton Friedman was against having the Federal Reserve and argued that if it was to remain, it should adopt a central bank policy aimed at keeping the money supply growth at a rate commensurate with the growth in productivity and demand for goods.

The new classical school of macro-economists, including Robert Lucas, opposed Keynes and criticized Keynesian models that did not work under rational expectations.

Work carried out by new classical macro-economists resulted in the formation of the Real Business Cycle Theory (RBC). RBC models assume that markets are clear, and that business cycles are driven by changes in technology and supply, not demand.

The New Keynesians addressed the critique against Keynesian theory, and argued – based on new models – that recessions can be explained by demand factors. Important concepts here is the notion of sticky prices and that rigidities keep prices from dropping to market-clearing levels.

Macroeconomics significantly impacts exchange rates and the currency market in general.  Macroeconomic trends will determine the long-term development of the currency market.   A currency will strengthen if its macroeconomic foundation is stronger than that of another currency. The short-term impact of macroeconomic factors is smaller as market psychology and speculation will have a larger impact on the short term exchange rates.  Long-term speculators in the forex market can use macroeconomics as a guide to their investments.  On the other hand, Daytraders will have to rely on other factors such as technical analysis, the tools provided by the broker, and breaking news to guide their trading.

The new growth theories concern long-run economic growth. They were developed by economists that stayed out of the new classical and new Keynesian debate.

The Great Recession of 2007-2009 sparked a booming popular interest in heterodox economic theories. Heterodox theories goes against the orthodox schools of economic thought.