Modern macro-economics is often said to have started when the English economist John Maynard Keynes (1883-1946) published his book “The General Theory of Employment, Interest and Money” in 1936.

In this book, Keynes expanded the concept of liquidity preferences and used it as a foundation to create a general theory of how the economy works. The general theory brings together both monetary factors and real economic factors.

Keynes is famous for not only creating the general theory, but for also suggesting and promoting a governmental policy where the aim is to achieve a more stable economy and work against the cycles of boom and bust. 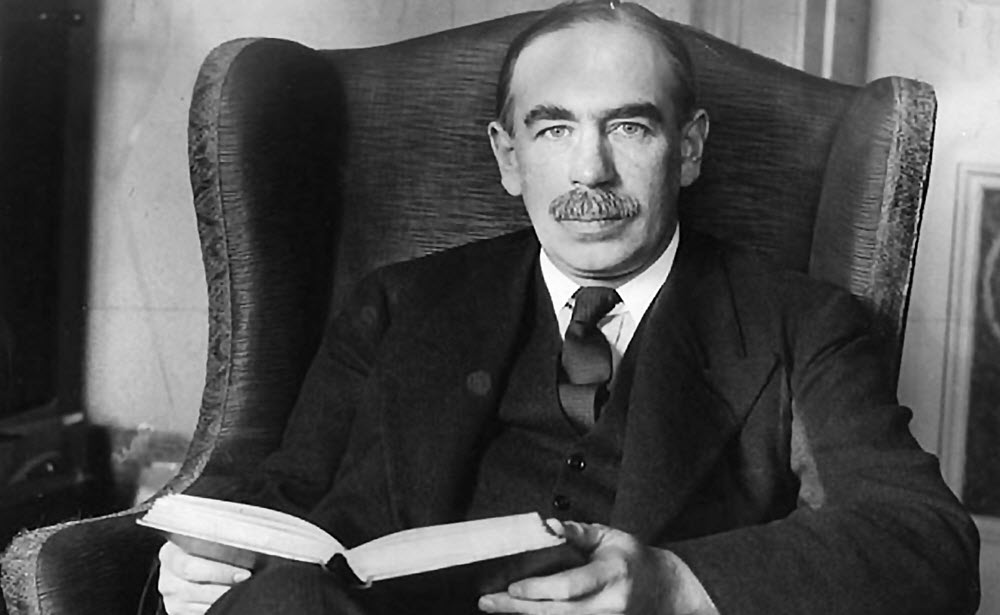 According to Keynes, economic output is positively correlated with money velocity. Consumers will reduce their spending in times of economic difficulty, which slows down the economy even more. Therefore, the many individuals that are being thrifty to survive during harsh economic times are actually worsening the economy. Money velocity will slow as demand for money increases, and excess goods can end up being left to waste – and production capacity to idle.

Keynes argued that market changes shift quantities rather than prices – a stance which turned the quantity theory on its head. If spending is decreased but prices are not, the surplus of goods reduces the need for workers in production.

Keynes explained something that classical economists had been struggling with: involuntry unemployment and recessions. Classical economists largely stuck to applying Say´s Law to the labour market, which made them assume and expect that all individuals that are willing to work at the prevailing wage would have employment.

According to Keynes, both employment and production output are propelled by aggregate demand – the sum of consumption and investment. If consumption remains stable, most fluctuations in aggregate demand will be the result of investment. Investment is driven by a complex web of factors, including expectations, interest rates and what Keyenes called “animal spirits” – the instincts, proclivities and emotions that ostensibly influence and guide human behavior.

Keynes argued that fiscal policy could – and should – be used to compensate for the inherent volatility in the economic system.

In the 20th and 21st century, numerous economists have argued in favour or against Keynes general theory, and also debated the exact formulations and mechanisms of the Keynesian model.

One of the more well-known schools of economic thought that followed soon after Keynes is the one that combined classical microeconomics with Keynesian ideas to form the neoclassical synthesis. The neoclassical synthesis became highly influential after the Great Depresion and dominated macro-economics in the United States (and many other parts of the world) until the early 1970s.

With the Keynesian camp, two main groups formed that were critical of the neoclassical synthesis: