Ludwig von Mises (1881-1973) is considered one of the most influential economic and political thinkers of the 20th century. He was an Austrian School economist who wrote and lectured on the societal contributions of classical liberalism. Among other things, he is famous for his work on praxeology studies comparing communism and capitalism.

Since the mid-20th century, Mises work have had a great influence on libertarian movements, and he is widely held as one of the major forces behind the revival of classical liberalism in the post-WWII era.

Mises magnus opus was the 1949 “Human Action: A Treatise on Economics”, where he argues in favour of laissez-fair capitalism. In this work, Mises rejects positivism within economics, defends an a priori epistemology, and underpins praxeology with a foundation of methodological individualism and laws of apodictic certainty. According to Mises, the free-market economy outdistance any government-planned system and serves as the foundation of civilization itself.

Published in 1940, Mises “Nationalökonomie: Theorie des Handelns und Wirtschaftens” is a predecessor to “Human Action: A Treatise on Economics”. The English work is not a direct translation of the German work, but it uses the same general framework and expands on it. 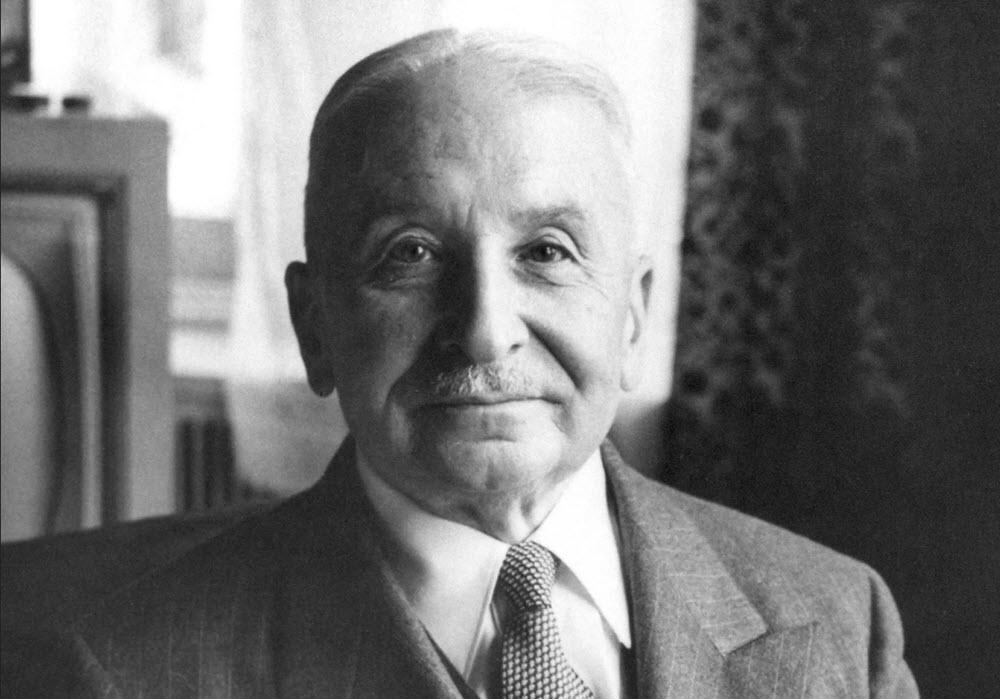 Ludwig Heinrich Edler von Mises (29 September 1881 – 10 October 1973) was born in Lemberg, which was then a city in Austria-Hungary. (Today, the city is within the western part of Ukraine, and is known under its Ukrainian name, which is Lviv.) The family was living in Lemberg because von Mises father, Arthur Edler von Mises, was stationed there as a construction enginner with the Czernowitz railway company. The family eventually moved back to Vienna while Ludwig and his younger brother Richard were still children. (Richard grew up to be a mathematician and probability theorist, and member of the Vienna Circle.)

Arthur Edler von Mises came from a Christian family, while his wife Adele née Landau came from a Jewish family. Both families were prominent; the Edler´s had been elevated to the Austrian nobility in the 1800s, and Adele´s uncle was Dr. Joachim Landau, a Liberal Party deputy to the Austrian Parliament.

By the age of 12, the young Ludwig von Mises already spoke fluent German, Russian, Polish and French, read in Latin, and could understand Ukrainian.

Mises enrolled at the University of Vienna in the year 1900, where he was strongly influenced by the works of Carl Menger, the founder of the Austrian School of economics. In 1906, he was awarded his Juris Doctor from the school of law and began working as a civil servant in Austria´s financial administration.

Life and career in Europe

After a brief stint as a civil servant, Mises took a trainee position in a law firm in Vienna, and also began lecturing on economics. He joined the Vienna Chamber of Commerce and Industry in 1909.

During World War I, he served as a front officer in the Austro-Hungarian artillery and as an economic adviser to the War Department.

In 1934, he left Austria for Switzerland, where he worked as a professor at the Graduate Institute of International Studies in Geneva until 1940.

Life and career in the United States

In 1940, a grant by the Rockefeller Foundation made it possible for Mises and his wife Margit Herzfeld Serény to leave Europe and settle in New York City, USA. Like many other classical scholars who fled from Europe during WWII, Mises was also supported by the William Volker Fund.

In the United States, Mises worked as a visiting professor at New York University from 1945 until his retirement in 1969. He was not paid by the university; instead he was funded by the libertarian commentator Lawrence Fertig, who was on the New York University Board of Trustees.

In 1962, Mises received the Austrian Decoration for Science and Art for political economy[20] at the Austrian Embassy in Washington, D.C.

When Mises retired from teaching, he was 87 years old.

He died in New York City in 1973 and is buried at Ferncliff Cemetery in Hartsdale. His personal library was willed to Hillsdale College.